Home > About Compass > Blog > Does Acid Reflux Cause GI Cancer?

Does Acid Reflux Cause GI Cancer? 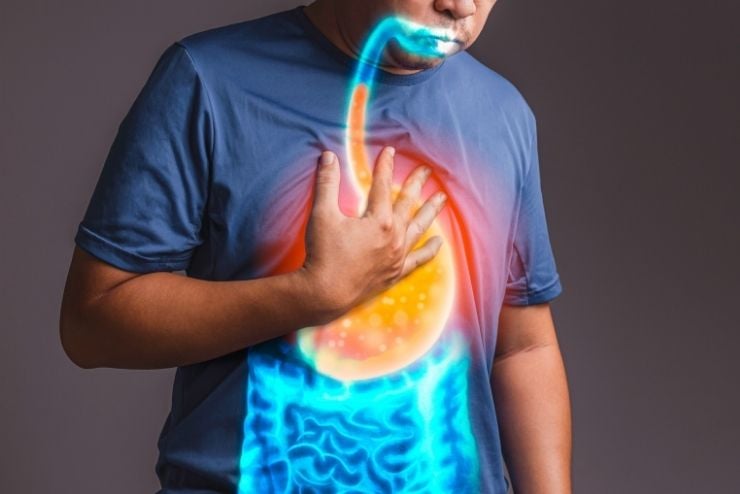 The lower esophageal sphincter (LES) is in charge of tightening the esophagus after food is passed into the stomach. When the LES is weak, the acid from your stomach washes up into the lower part of your esophagus causing a burning sensation. This is acid reflux. But does acid reflux have a connection to stomach or esophageal cancer?

The Link Between Acid Reflux and GI Cancer

Does Long-Term Use of Medications for Acid Reflux Increase Cancer Risk?

Proton Pump Inhibitors (PPIs) are commonly used to treat acid reflux, including GERD. They suppress acid production, reducing esophageal irritation and the typical symptoms of GERD including heartburn and regurgitation.

The drugs have been in use for more than two decades. In recent years, some researchers have raised questions about the long-term side effects of PPIs. Specific research studies conducted in the last few years have indicated the increased risk of stomach cancer with prolonged use of PPIs.

The gastric cells of the stomach secrete an enzyme called gastrin. Gastrin handles the pumping of stomach acid. PPIs block acid production by shutting down the proton pumps. As a result, the body demands more acid and, consequently, more gastrin is formed. Excessive secretion of gastrin can lead to the formation of gastrointestinal tumors.

Does GERD Increase the Risk of Cancer?

When acid reflux is chronic, meaning it doesn’t go away after a short period of time, it’s considered Gastroesophageal Reflux Disease, commonly referred to as GERD.

The stomach uses hydrochloric acid to help break the food and fight pathogens. The tough lining of the stomach can withstand the strong acid. However, the esophagus doesn’t have that same lining. That means repeated exposure to the acid, because of GERD, damages the esophageal tissue.  This results in a slightly higher risk of developing esophageal cancer because of the constant irritation of the esophagus.

About 10% of GERD patients develop Barrett's esophagus. People who have had trouble with acid reflux for over five years and experienced increased difficulty in swallowing are at the highest risk of the condition.

Does Barrett’s Esophagus Cause Cancer?

Experts recommend that patients with GERD or Barrett’s esophagus opt for routine examinations to determine if there are precancerous cells, called dysplasia.  These can often be treat before cancer develops.

How is Barrett’s Esophagus Diagnosed?

Barrett's esophagus is usually diagnosed through an upper endoscopy. A small piece of the tissue is removed from the esophagus, and a biopsy is performed to confirm the diagnosis. The pathology report will also reveal the presence or absence of dysplasia, or in rare cases, cancerous cells in the esophagus.

How to Treat GERD Before it Becomes Barrett’s Esophagus

There are several things you can do to help reduce GERD symptoms:

GERD can be treated with a relatively simple surgery to repair the failed lower esophageal sphincter. This can be a good option for a more permanent fix that does not require long-term use of Proton Pump Inhibitors or other medications.

Caring for GI Cancers in Portland and Vancouver

If you have been diagnosed with a GI cancer including stomach or esophageal, as a result of GERD, Barrett’s Esophagus, or PPI use request a consultation with our GI cancer specialists.

We understand that every patient is different. Our oncology team focuses on creating personalized treatment plans for all our patients. We also provide palliative care, diagnostic services, and access to relevant clinical research.

If you have been diagnosed with cancer, give us a call. Our compassionate team of oncologists will take care of you through every step.