Because lung cancer develops in the lungs, as you’d probably expect, its most common symptoms involve the lungs. Persistent coughing, coughing up blood or excess mucus, shortness of breath, and chest pain are all common signs of lung cancer. The presence of these symptoms doesn’t definitively mean you have lung cancer, though, as they can also be caused by other conditions. That’s why it’s important to be evaluated by your doctor sooner rather than later.

Here are seven other symptoms of lung cancer that don’t have anything to do with the lungs:

1. Clubbing of the Fingernails and/or Toenails 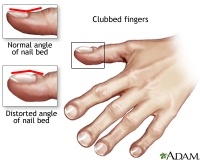 Clubbing in fingers or toes occurs in many conditions, including lung cancer. One clue to doctors that clubbing could indicate lung cancer is when fingers are also nicotine-stained. Clubbing occurs in stages. In early-stage lung cancer finger clubbing, the nail bed may be soft and the skin next to it may be shiny; nails may appear more curved than usual when viewed from the side, and the ends of fingers may become larger than usual. Finger clubbing associated with advanced lung cancer may cause extra areas of bone to form along the finger joints and wrists. Clubbing is one of several symptoms caused by substances (such as hormones or proteins) secreted by cancer cells.

Lung cancer can also spread from the top of the lung, causing tumors in the nerves of the arms and/or shoulders. These tumors are sometimes called Pancoast tumors. The symptoms associated with a Pancoast tumor are known as Pancoast syndrome. These symptoms can include shoulder pain that radiates to the inner part of the scapula (the large, flat bone that covers the ribs on the back.) Pain may eventually extend to the inner arm, elbow, and pinky and ring fingers.

Other symptoms of Pancoast syndrome include:

Pancoast syndrome pain may become so severe that it requires prescription pain medications for relief.

3. Loss of or Hoarse Voice

Difficulty producing sounds or abnormal changes in speech sounds may be a symptom of early lung cancer.

In advanced lung cancer cases, loss of voice or hoarseness is a common symptom that can be caused by several factors.

Each of these factors can cause your voice to change or disappear completely.

The most common cause of voice loss is laryngitis. However, If you experience hoarseness or loss of voice for more than two weeks you should see you primary care doctor.

As lung cancer spreads, it sometimes generates tumors that restrict the large vein that carries blood away from the head and arms, back to the heart. When this happens, blood flow slows causing blood to back up in the veins. The excess fluid may cause the face, neck, upper chest and arms to swell. The skin in these areas may also take on a bluish-red hue.

Swelling can develop quickly or slowly. However, an early symptom may be facial or eye swelling first thing in the morning. If you have explained swelling that doesn't go away on it's own then you should talk with your doctor.

Thirst is common with the sudden onset of warmer weather, but sudden extreme thirst is a symptom that you should always discuss with your doctor. Some lung cancer tumors create a protein that acts very similar to the parathyroid hormone produced by the parathyroid gland. The parathyroid gland and kidneys normally regulate calcium levels in the body.

Cancer tumors can disrupt the process of regulating calcium, and lead to too much calcium into the bloodstream. Having a higher than usual level of calcium in the blood is called hypercalcemia, and about 10% to 20% of people with cancer develop hypercalcemia. High calcium levels are associated with being thirst and frequent urination.

This is certainly the most ironic lung-cancer warning sign. It's common for most smokers to have difficulty quitting. However, a number of lung cancer patients end up kicking the habit before getting a lung cancer diagnosis.

A study published in the Journal of the International Association for the Study of Lung Cancer concluded that 48% of the 115 lung cancer patients they evaluated quit smoking spontaneously and with very little effort before they were diagnosed with lung cancer. The researchers believe that early lung cancer tumors may secrete a substance that blocks a nicotine addiction.

Horner Syndrome can also be caused by Pancoast tumors. Horner Syndrome is caused when the tumors affect the nerves leading to the eye or face. Signs of the condition can cause:

Be Watchful for Earlier Detection

Smokers and non-smokers are both at risk of developing this disease. Whether you are a smoker or have never smoked in your life, it’s important to educate yourself on the common and uncommon signs and symptoms of lung cancer. Visit the Lung Cancer Signs & Symptoms section of our website for a complete list.

The earlier lung cancer is detected and diagnosed, the sooner cancer treatment can begin. Know the symptoms to watch for, be sure to talk with your doctor about schedule your lung cancer screening if you're at risk, and, even more importantly, know your body and trust your instincts!

And know, it's never too late to quit smoking or changing your habits in order to reduce your risks of developing lung cancer!

If you have any questions about the signs, symptoms, or diagnosis of lung cancer, and you are in the Portland-Vancouver area, contact the cancer specialists at Compass Oncology. Our team is here to help guide you.